The TRUTH About the DANGERS of Birth Control | Weight Gain, Depression & Appetite Changes 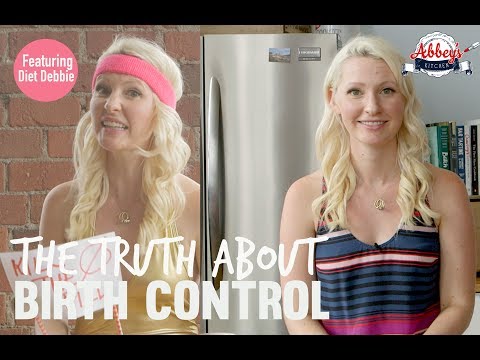 Medical Disclaimer:
The content in this video is not intended to be a substitute for professional medical advice, diagnosis, or treatment. Always seek the advice of your physician or other qualified health provider with any questions you may have regarding a medical condition.

In this episode of Abbey’s Kitchen, Abbey is joined by our fav dieter, Debbie! Today Debbie is concerned that birth control is poisoning us and contributes to a ton of toxins in our body. Debbie claims the pill causes blood clots, stroke, depression, loss of libido and even weight gain.

Abbey admits that contraceptives can be a very controversial and complex topic, and in the past the pill used to contain scary high doses of estrogen, but over time, scientists have developed much safer birth control pills that have been developed with fewer side effects.

Debbie is still not convinced and blames everything on toxic hormones like estrogen and progesterone. In actuality, Abbey shares with Debbie a 2014 Cochrane review found that the combination of estrogen and progesterone found no significant difference in weight gain, but the largest difference in weight gain was about 4 pounds after 12 months. Debbie still sees this as significant and wants to KILL THE PILL.

Debbie still believes that all birth control is bad, and mentioned that her friend’s appetite increased and they bloated up.

Abbey looked at the research and found that the majority of studies on appetite were solely perception based. Granted, high doses of estrogen tend to cause water retention, but most pills have pretty low doses. Recent studies have concluded that birth control doesn’t cause significant bloating.

Debbie also claimed that birth control causes depression. Abbey checked out the same Danish study and it found that when they observed one million women taking birth control for 6 years, there was a significant correlation between birth control and clinical depression. This is not a new theory, but sadly women’s health is not always at the forefront in the medical community and sadly there’s a lot of politics that come into play.

Debbie is no feminist but she’s sure that if men had to take the pill, there wouldn’t be all these side effects. Finally, Abbey and Debbie agree on something. Abbey has found some research with the male pill, but because of the ton of side effects, a lot of that research has been put on hold. It’s a man’s world.

Abbey and Debbie both agree that there’s a lot more that needs to be done, but at least studies like the Danish one are starting to lift the veil and giving women a voice and more control over their choices. At the end of the day, it’s a risk and benefit analysis and it’s up to you to decide for yourself whether you can tolerate the side effects and whether it outweigh the risk of having an unwanted pregnancy. As always, Abbey recommends speaking with your doctor about your concerns and continue to read up on new studies because there’s a lot more we need to know to understand all the ways hormones impact our health.

For more tips on staying healthy, recipes, dieting, and information fit for consumption by foodies everywhere stop by Abbey’s blog.