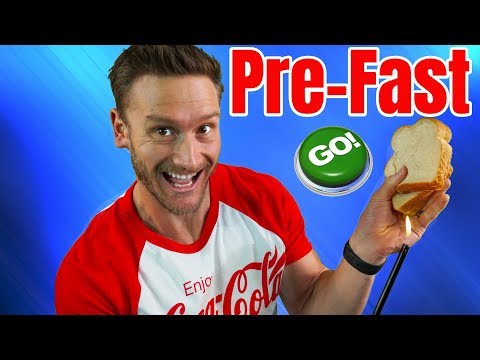 Study – American Journal of Physiology:
Assessed the impact of the macronutrient content of a meal on the postprandial leptin response. 22 young healthy subjects (11 men and 11 women) were given, in a randomized order, an isoenergetic meal [carbohydrate (81%) or fat (79%)] or remained fasting. In both genders, leptin response was higher after the carbohydrate meal than after the fat meal and while fasting. In conclusion, a carbohydrate meal induces higher postprandial leptin levels than an isoenergetic fat meal.

So we know that carbs will increase levels of leptin. However, the following study found that leptin levels need to be low in order for fat burning to take place. So trying to spike your leptin right before a fast could be counterproductive.

Leptin & Fat Burning:
To keep the human brain supplied with energy when food was scarce, mammals evolved the ability to switch from burning carbohydrates to burning fat in order to preserve skeletal muscle that would otherwise be metabolized and converted to glucose. Scientists long believed that the transition to fat metabolism was instigated solely by a drop in insulin. But a new study identified leptin as a key mediator – during starvation, plasma leptin levels fall, activating a pathway that promotes the breakdown of fat and mediates this critical shift from glucose to fat metabolism. While a drop in insulin also occurs, a decrease in leptin is also necessary for this process to happen.

Study Summation:
Researchers investigated the rate of carbohydrate and fat metabolism as rats went from a fed to a fasted state. The researchers observed that as the rats fasted, leptin levels decreased and activated a pathway that led to fat burning rather than carb burning. During fasting, the rats’ use of stored glucose went down and sugar levels decreased as a result. In turn, levels of insulin and leptin decreased – the rats’ bodies then broke down body fat to be turned into ketones for energy.