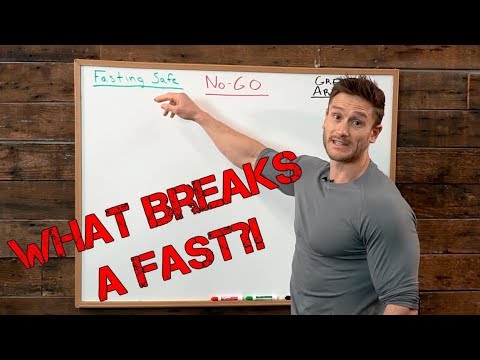 But first off, let’s go ahead and let’s talk about a couple of things that are good to go while you’re fasting. First and foremost, we know that good, old-fashioned H2O is good to go. Unless you’re doing a dry fast, water is not going to cause a problem. You’re good to go. Kind of an obvious one. The next one I want to talk about, green tea. Very powerful, that epigallocatechin-3-gallate, that EGCG, is really powerful. Allows your body to mobilize fats quite a bit better, so it’s a very good thing to be drinking while you’re fasting. Then, we’ve got coffee, of course. Coffee will not break a fast as long as it’s black. Totally good to go. Again, the caffeine mobilizing fatty acids. You’re good there. It’s going to help expedite the process of fasting. It’s going to help expedite glycogen removal, or should I say, storage, that the carbs and the glycogen and the glucose isn’t in your bloodstream anymore. It goes into the muscles. We definitely want that, so that’s powerful.

Here’s a kind of a weird one. It’s going to be most teas, black, green, or whatever, but I have to say this now, certain herbal teas with fruit. You see some herbal teas out there, the have little chunks of apple, they have little chunks of berries that are dehydrated. You’re getting the fructose from those fruits, so I would highly recommend staying away from those. That’s a no-go.

So then, back to the fasting-safe, now we’ve got different sodas that I want to talk about. Zevia, for one, I’ve talked about this in a video. That’s a soda that’s sweetened with Stevia, so you’re good to go there. And, as much as I hate to say this, I’m going to go on the record by saying I don’t think that aspartame is good. I don’t think it’s healthy, but a lot of people ask. Diet Coke, diet sodas, you’re going to be okay. Aspartame doesn’t technically break a fast. So, you’re okay there. I just don’t think it’s the best thing to do, but I know that a lot of you are wondering that, so I’m going to go ahead and say it.

When we look at any kind of carbonated beverage, you’re usually good to go, so I’m just going to say carbonated water, carbonated H2O, sparkling beverages, things like that. People also always ask about vaping, because there’s oil, and you’re ingesting the vape. Does vaping break a fast? Generally, no. You’re not swallowing the oil, you’re inhaling it. What I will say is that vape, the nicotine that is usually in vape, just like smoking, affects your electron transport chain. It affects NADH. That’s why you get a high from it. That’s why you get a buzz. The jury is still a little bit out on whether not not nicotine technically would constitute breaking a fast, but for the sake of the metabolic function of a fast, you’re okay.

I’m going to leave this here for now. There might be one or two more that I add, but I want to start going over the things that will break a fast. I already talked about herbal teas that have fruit in them. Now, the big one, guys. MCT oil and powder. I love that stuff and it’s great for keto, but it does break a fast. There’s still eight calories per gram. Unlike most fats that are nine calories per gram, MCTs only have eight. It’s a little bit different. They still are digested. They still elicit a metabolic response. It’s still food. It’s still calories. If you have a couple of tablespoons of MCT oil, you’re still looking at a couple hundred calories. That’s definitely not fasting, okay? So, MCT oil does. So does coconut oil. Same kind of thing. You’ve got to be careful there.