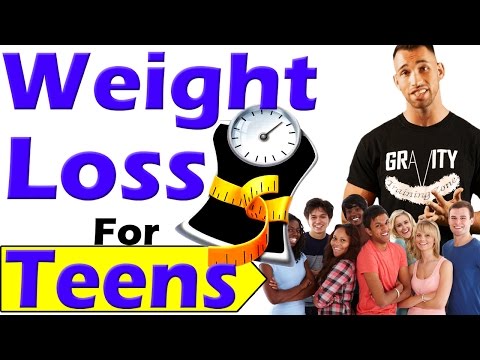 Learn how to lose weight overnight for teenagers

Teenagers are the topic for this video and let me tell you right off the bat… the beauty of being a teenager is that you have a lot of time to achieve your fitness goals. Believe me I get it we would all prefer to wake up tomorrow with the body of our dreams, and a rippling sick pack by doing some super secret program that nobody else knows about. However, unfortunately there’s no such thing as an overnight fix. Ever since I made a video about man boobs I’ve been getting non stop questions from younger guys about how to get rid of their chest fat. Well with this video I intend to give you all you need to get rid of chest fat, belly fat, build some muscle, and in general shoot for the physique you want and deserve to have. The points that I make in this video will apply the same way to teenage girls as they do to boys.

First I want to go back to the biggest benefit of being a teenager…you have time! You are living in a body that’s growing and always changing. When you become a full grown adult it’s like things just get locked into place. That’s not to say that it’s impossible to burn fat or completely change your body as an adult, but the really cool thing about being a teenager is that you have so much control over what you’re going to look like as an adult. I always found it was a lot easier to make muscle gains, strength gains, and burn fat when I was younger and still growing. If you’re body is in the middle of growing, I personally believe that it’s that much easier to grow your muscles and in general effect what your ultimately going to grow into.

As a teen especially if your a younger teenager like 13 or 14 you have so much time in which you can effect what you will look like as an adult. This is actually exactly the age that I started working out, and let me tell you when I started I was not by any means, athletic, lean, muscular, or genetically gifted. The #1 thing that I did to turn this all around, and I want you guys to really focus and pay attention to this, the #1 thing that I did was I just got started, and…this is important… I didn’t stop.

Being and looking fit is a lifelong process, and the cool thing is if you start early in your teens it’s gonna pay off big time when you get older. As an adult there is so much confusing information out there about fitness, and as a teenager since your probably brand new to the fitness world it’s even more confusing. You don’t need the ultimate teenage workout program to start you just need to stop making excuses and get started on almost any program. When I was 14 I probably benched less than everyone in my high school gym. Even though I felt embarrassed, I still came in and did it again and again and again. And after a few years, I was benching way more than most of the people that started off stronger than me.

Listen to me…consistent action will beat natural or genetic advantages over time. You may think it’s unfair that somebody in school can eat whatever they want and not workout hard and still be so much more fit than you are. In reality the truth is that these people might not have a genetic advantage, they may have been working hard playing sports their whole life or they may just have been more active than you without you even knowing it. All the while you were playing video games. Regardless if you put in the work daily starting now, by the time you’re all grown up you could easily come out way further ahead even than the truly genetically gifted in any area of life you choose including fitness.

Okay so now that you know it take daily consistent action to have long term success, I want to give you the 3 action steps that you should take daily to get to your goals.

#1 Try to avoid eating anything that isn’t real food that grew naturally from the Earth. If you have a box with a picture of food on it and you look at the ingredient list and there’s a bunch of ingredients that you can’t even pronounce, that does not fall under the category of real food. Real food is brown rice, wild caught seafood, yams, chicken, turkey, quinoa, oat meal, fruits, vegetables, and pretty much anything that is the single ingredient. It’s not made up of ingredients it is what it is. Salmon is salmon, and rice is rice. Pasta is not pasta. Its flour, and a whole bunch of other ingredients. If you simply stick to real food, include a lot of green vegetables, and exercise throughout the week this should be enough to have you moving in the right direction. Convincing your parents that you want to be healthy and eat clean food shouldn’t be that hard