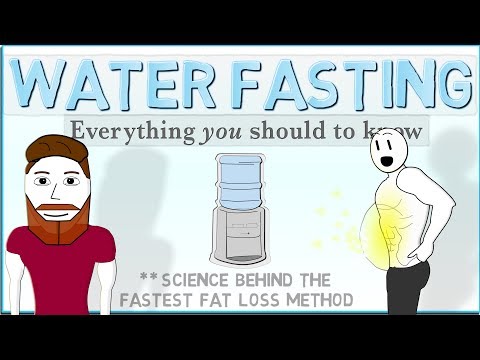 In this video, learn how to Water Fast. How much weight loss to expect, and also dive into the additional benefits and science.
►Fasting Safe Electrolytes: https://bit.ly/Fasting-Electrolytes

This video is not medical advice, always consult your physician.

So off the bat, one advantage of Water Fasting becomes clear, that’s the speed. For example, assuming a consistent daily burn of 2500, in just 72 hours You’ll have burnt 7500 calories. This same level of weight loss would have taken the person on the cutting diet 15 days. This speed advantage has been confirmed by research studies,in one review researchers remarked on the significant amounts lost over short durations. For example in one study men fasted on and off over two weeks, and by the end had lost 3% of their bodyweight, in another study women lost 4% after 3 weeks of on and off fasting.

Another advantage to water fasting is, after the fast is complete, the person fasting doesn’t need to continue to eat below what their daily burn. Remember, they are looking at the big picture, as long as they are in say a weekly calorie deficit, there may be days within that week that they eat in a slight surplus, unlike the daily calorie restriction dieters whose bodies remain in a deficit day after day.

So while water fasting has the potential for faster fat loss, including occasional daily surpluses has actually resulted in studies showing more participants stick with these periodic water fasting diets, and as a result, they are able to lose more weight since they don’t quit.

Leading up to your water fast it’s a good idea to stay well hydrated, including adequate fiber in your diet beforehand is also recommended to help prevent constipation.

As the 16 hour mark approaches though, glycogen stores are nearing depletion, as this happens blood glucose and insulin levels fall. Hunger signals reach their highest point here, and you may even feel like you have difficulty concentrating. In my opinion this 16-28 hour period is the hardest part of any fast, contrary to what many would assume though, from here everything actually gets better.

See while you might be feeling frustrated and hungry, your body is implementing an amazing metabolic shift. Since insulin has fallen, fat cells begin releasing free fatty acids back into the bloodstream, Its during this 16-28 hours period that cells like your muscles shift over to burning this fat for fuel.

The enhanced initial weight loss is caused not by excess fat being burned, but by the body’s switch to burning fat and ketosis itself. The switch causes the body to drop large amounts of sodium, since sodium is one of the main electrolytes used to hold water in our bodies, the body also begins dropping water, leading to this extra weight loss.

At this stage Water Fasters might also begin notice a mental shift, clinicians have noted in subjects increased levels of alertness, mood improvement, a subjective feeling of well-being and even occasionally euphoria.

The increases in energy and focus reported by Water fasters may stem from increased levels of norepinephrine, a catecholamine which operates as a hormone and stimulatory neurotransmitter in the body. In normal subjects levels are usually near 0 during sleep, and reach their highest levels during the fight or flight response.

As far as insulin goes, I’ve yet to see a study that shows black coffee or unsweetened herbal tea could cause insulin to rise. In fact one analysis linked coffee consumption to lower levels of fasting insulin.

While fasting activates several pathways which could in theory have an effect on this, the one you’ll hear the most about is Autophagy.